The Dream of Revolution

A Biography of Jayaprakash Narayan 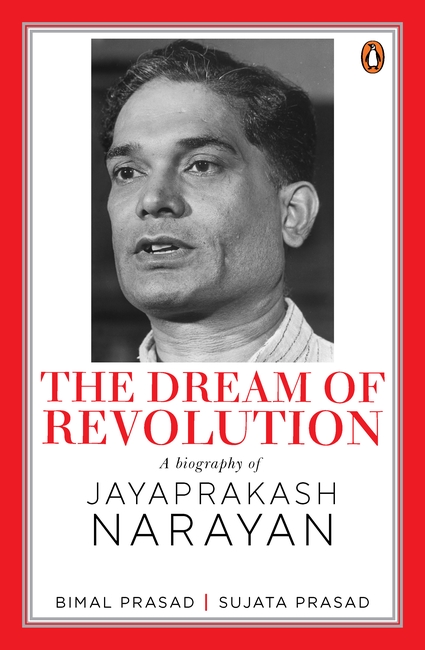 Few figures in modern India have enjoyed such acclaim and adoration as Jayaprakash Narayan. And yet, he has been equally vilified for all that went wrong in the unfinished post-colonial movement for freedom and democracy. Jayaprakash Narayan, or JP as he was universally known, epitomized the Marxian and Gandhian styles of political engagement, and famously brought a powerful government to its knees. Throughout his life, he channelled an emotional hunger for transformative politics, jettisoned easy options, shunned power and incubated revolutionary ideas.

A comprehensive study of JP’s life and ideas-from the radicalism of his thought process at American university campuses in the 1920s to his political coming of age in the 1930s and subsequent disenchantment with Gandhi’s leadership; from his infectious confidence about the future of socialism to his seemingly naive plans to outmanoeuvre powerful forces within the Congress; from his fractious friendship with Jawaharlal Nehru to his relentless crusade against the stifling of dissent-The Dream of Revolution, Bimal and Sujata Prasad’s rigorously researched biography of JP, dispenses with clichés, questions commonly held perceptions and pushes the limits of what a biographical portrait is capable of.

Rich in anecdotes and never-before-told stories, this book explores the ambiguities and ironies of a life lived at the barricades, and one man’s unremitting quest to usher in a society based on equality and freedom.

'A riveting account of the life of the greatest keeper, after Gandhi, of India's political conscience, who died, like his guide, in the loneliness of shattered dreams, betrayed ideals, forsaken covenants. JP's incredible life needs to be studied, restudied, told, retold. And who better than Bimal Prasad's daughter'. - Gopalkrishna Gandhi

'If an institution, as Ralph Waldo Emerson wrote, is the lengthened shadow of one man, Jayaprakash Narayan's touched an entire arc of history. From his battle of ideas in the Congress, shaped by Bihar as much as Berkeley, to his rallying cry of Total Revolution agianst the Emergency, JP was, and remains to this day, the talismatic face for the opposition in a deeply divided democracy. His journey lies at the heart of Sujata Prasad and Bimal Prasad's remarkable biography The Dream of Revolution. The book is a labour of love, a deeply felt and yet dispassionate analysis, invaluable for scholars and students. Blending personal and political, public and private, the authors explain how JP galvanized an entire generation of midnight's children, helping them find, in democratic politics, a cause larger than themselves. There couldn't be a more relevant political life story than this.' - Raj Kamal Jha

'Sujata Prasad's biography of Jayaprakash Narayan sketches a vivid picture of his life and times in the nationalist movement and in independent India. Its elegant prose brings to life his revolutionary ideas and socialist beliefs, juxtaposed with political realities that tormented him with unanswered questions. Even so, his dissenting voice and moral stature provided critical checks and balances for our political democracy, which are sorely missed in these difficult times. The Dream of Revolution is an engaging must-read for anyone interested in the history and politics of democracy in India'. - Deepak Nayyar

Bimal Prasad (1924-2015) was professor of South Asian Studies at Jawaharlal Nehru University. He was also a visiting professor at the University of Leeds, a senior fellow at the School of Oriental and African Studies (SOAS), University of London, and a fellow at Columbia University, New York. From 1991 to 1995, he was India's ambassador to Nepal. Professor Prasad authored and edited numerous books on Indian history and foreign policy. His trilogy on Partition is recognized as a seminal work of scholarship. A close associate of Jayaprakash Narayan, he chronicled JP's political thought and legacy, and edited selections of his writings, speeches and letters in ten volumes.

Sujata Prasad is a writer, columnist, curator and heritage conservationist. Her work and research interests cut across disciplines, intersecting with community health, education, rural livelihoods, and the visual and performing arts. Her previous book was published by Penguin Random House in 2017. A former civil servant, she is currently adviser to the National Gallery of Modern Art, New Delhi, and also serves as an expert on the Ministry of Science and Technology's advisory group on heritage research.