The Murderer, The Monarch and The Fakir 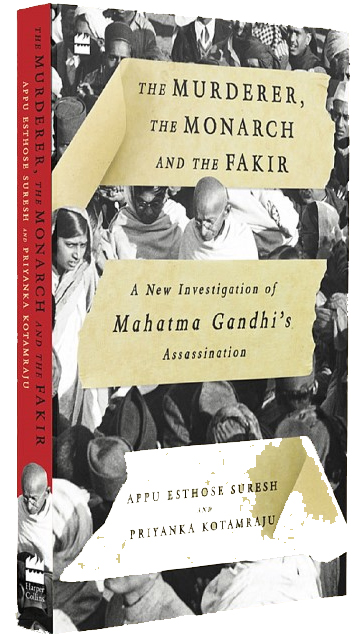 The Murderer, the Monarch and the Fakir is a fresh account of one of the most controversial political assassinations in contemporary history-that of Mahatma Gandhi. Based on previously unseen intelligence reports and police records, this book recreates the circumstances of his murder, the events leading up to it and the investigation afterwards. In doing so, it unearths a conspiracy that runs far deeper than a hate crime and challenges the popular narrative about the assassination that has persisted for the past seventy years.

The Murderer, the Monarch and the Fakir examines the potential role of princely states, hypermasculinity and a militant right-wing in the context of a nation that had just won her independence. It relies on investigative journalism and new evidence set in a strong academic framework to unpack the significance of this tumultuous event.

5 Reasons Why You Should Read The Murderer, the Monarch and the Fakir | EPILOGUE

This book examines the potential role of princely states, hypermasculinity and a militant right-wing in the context of a nation that had just won her independence. Here are five reasons why you should pick up this insightful read, as excerpted from the Epilogue:

1. As the authors pieced together evidence, intelligence note by intelligence note, it became clear that the conspiracy to murder Mahatma Gandhi was not the handiwork of a lone wolf or a few fanatic members of the Hindu Mahasabha. Most importantly, it was not conceived just a few weeks before 30 January 1948. The new evidence presented in this book traces the origins of the conspiracy to a time as early as a week before Independence Day in 1947. In the authors’ opinion, this discovery has enormous significance for the contemporary understanding of a defining moment in India’s history.

2. The book challenges the widely held perception that the Mahatma’s assassination was a response to the latter’s insistence that the Government of India pay fifty-five crore rupees to Pakistan, and the rehabilitation of Muslims from December 1947 to January 1948. Even the Jeevan Lal Kapur Commission, which was set up two decades later to re-examine the assassination, focused only on the key events from December 1947 onwards. Hence, what is presented in this book is fresh evidence, brought to light for the very first time.

3. The evidence the book puts forth—re-enacting the events from 8 August 1947 until the assassination on 30 January 1948—serves as a time capsule of the political struggles that had been unfolding over four decades, in which Gandhi’s politics of non-violence and the Hindu right wing’s programme of Hindutva feature prominently.

4. The book examines the key questions – which Gandhi was killed, and why was Gandhi killed? The assassin, Nathuram Godse, said at his trial that with Gandhi gone, the government could follow ‘practical politics’, which in other words meant that the state was free to take violent recourse in the ‘national interest’. According to Godse, he had killed a man who was anti-state and hence anti-national.

The state that Godse and the Hindu right wing was obsessed with was an aggressively centralized one, a type of state that Gandhi did not want because he envisioned the decentralization of power. Gandhi never wavered in his belief in and commitment towards non-violence and remained opposed to a monocentric state with brute machinery.

Godse thought he had killed a man who was anti-state and, hence, anti-national. But the difference between Gandhi and Godse (read, the Hindu right) can be properly understood through a basic disagreement over the morality of the use of aggression by the state, which the book attempts to do.

5. In recent years, the national narrative has become preoccupied with either vigorously opposing or enthusiastically supporting the rehabilitation of V.D. Savarkar or Godse, whereas the real aim should be the rehabilitation, critically and empathetically, of Gandhian thought. The Gandhian doctrine was also about the practice of Sarvodaya—concern for the well-being for all—as a permanent antidote to hate and fear.

The book examines in detail: is Gandhi the moral compass that the nation needs today?

In short, Godse and those whom he represented killed a Gandhi they completely misunderstood. Or perhaps they never had the ethical sensibility and the spiritual imagination that are necessary to understand him in the first place.

As an investigative journalist, Appu Esthose Suresh did extensive work on the changing pattern of communal riots in India, making a significant contribution towards understanding a sensitive and complex topic. Appu was recognized by the Mumbai Press Club's 2015 RedInk Awards in the ‘Journalist of the Year' category for his series on the ‘Communal Cauldron in Uttar Pradesh'. He has worked with the Hindustan Times as editor (special assignments), and at the Indian Express and Mint, among other publications. He was part of the International Consortium of Investigative Journalists (ICIJ) team that investigated offshore accounts in British Virgin Islands and the HSBC Swiss accounts. Appu is currently Senior Atlantic Fellow at the International Inequalities Institute, London School of Economics & Political Science (LSE). He is also the founder of Pixstory. He completed his studies from St. Stephen's College, New Delhi, and LSE.

Priyanka Kotamraju is a Gates Cambridge scholar pursuing a doctorate in sociology at the University of Cambridge, and a Senior Atlantic Fellow at the International Inequalities Institute at LSE. She was formerly editor of Khabar Lahariya, an award-winning grassroots media organization. She has also worked with the Indian Express and the Hindu Business Line. She is the co-founder of Chitrakoot Collective, a grassroots feminist research collective.