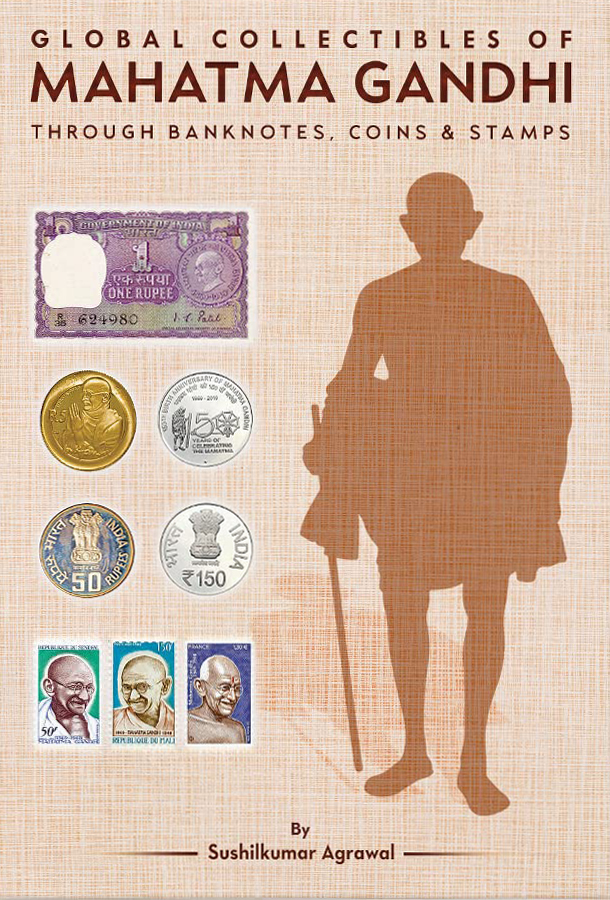 Mohandas Karamchand Gandhi is a man with simple attire and great deeds. He was the face of Indian freedom struggle and leader of India during the post-independence period. Many revolutionary across the globe have followed the teaching of truth and non-violence to fight the colonization and slavery. The world respects and bows to his extra ordinary approach against oppression. In recent century, many countries and organisations have tried to commemorate and honour Mahatma through Stamps, Coins and Banknotes. In this book an amalgamation is created to compile all this token of honour and appreciation.

The book "Global Collectibles of Mahatma Gandhi Through Banknotes, Coins & Stamps" is an informative and valuable encyclopedia for all Mahatma Gandhi's admirers. It gives detailed information about the coins, banknotes, and stamps issued to commemorate Mohandas Karamchand Gandhi throughout the globe. It consists of the images and details of the miniature sheets and souvenir sheets issued on Bapu across the globe.

To celebrate the 75th Independence and be a part of ‘Azadi ka Amrit Mahotsav’, Mintage World launched this book as a tribute to Mahatma Gandhi. Mintage World is the World’s 1st Online Museum for Ancient and Current Coins, Stamps, and Currency Notes.

Sushilkumar Agrawal is a first-generation entrepreneur and the CEO of Ultra Media & Entertainment Private Limited. It was his vision that bought such a priceless book into reality and gave all the admirers of Gandhiji a beautiful combination of all the legal tender together. In this book a combine effort of information is compiled in a sequence to cover all the commemorative issues printed and minted by different countries and Post offices to honour Mahatma Gandhi.